News Agency of Nigeria (NAN) via data compiled by Cinema Exhibitors Association of Nigeria (CEAN) most recent report shows that Nigerians spent over 1, 294, 602, 827 billion Naira watching movies in the cinemas for July and August of 2019.

Following its lead in June, ‘Bling Lagosians’ led the first week of July by raking in 37, 409, 372 million Naira. However, it was one of the only two Nigerian films in the top 20 movies.

The other was Kunle Afoloyan’s ‘Mokalik’ starting the month at number nine while ‘Avengers: Endgame’ sank to 18th position, earning 151, 966 Naira that week.

By the second week, ‘Spiderman: Far from home’ edged ‘Bling Lagosians’ out of the first position. It had a 34 per cent decrease in revenue while ‘Spiderman’ earned 64, 072, 680 million Naira.

‘Spiderman’ remained on top for the third week, although earnings decreased by 36 per cent. However, general grosses dropped by 20 per cent while ‘Lion King’ debuted for  few days, jacking in 4, 040, 854 million Naira.

By the fourth week, ‘Lion King’ had settled in and climbed to number one with 108, 447, 093 million Naira. ‘Bling Lagosians’ stayed at number three with ‘Mokalik’ at number 13.
Other Nigerian films in top 20 included ‘Rant Queens’ at number eight, ‘The Gift’ at number eleven, ‘Wakill’ at 15 and ‘Coming From Insanity’ at 17. 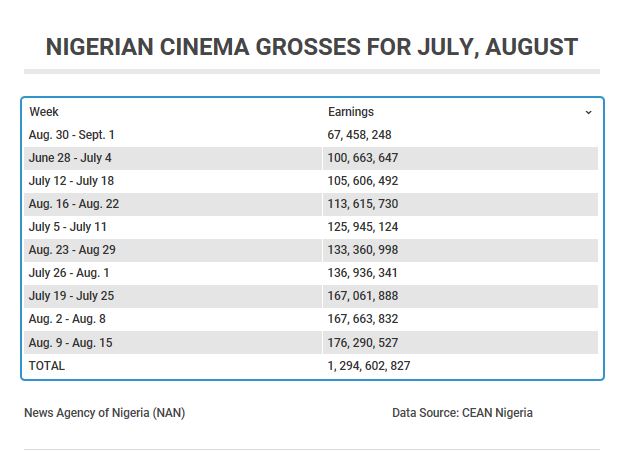 Although revenue dropped by 48 per cent, ‘Fast and Furious’ maintained the number one position while ‘The Set Up’ made its real box office debut at number three with 25, 634, 606 million Naira.

By the next week, all films maintained their positions but the ‘Bling Lagosians’ sank to number eight after spending eight weeks in the box office. ‘Once Upon a Time in Hollywood’ debuted leading to a week total of 113, 615, 730 million Naira.

In week nine, ‘Angel Has Fallen’ climbed to the number one spot, making 64, 227, 240 million Naira. ‘The Set Up’ was pushed to fourth position with a 49 per cent drop in revenue.

READ ALSO:Tekashi 6ix9ine didn’t say Cardi B was a member of the Nine Trey Bloods as full court transcript is released

For the last weekend in August, ‘Bling Lagosians’ settled at number 20 with ‘Once Upon a Time in Hollywood’ struggling at number 19. ‘The Set Up’ had dropped to number five.

What do you think?

This is to bring to your information that all articles on this blog are for educational purposes only. Any outsourced material used in the course to developing our articles are with due credit to their respective owners. You can also use the contact form to reach us directly if you feel any of our articles infringe your copyright.

Your password reset link appears to be invalid or expired.

This site uses functional cookies and external scripts to improve your experience.

NOTE: These settings will only apply to the browser and device you are currently using.